Attorney General Schneiderman was joined at New York City’s Penn Station by the Metropolitan Transportation Authority to announce that the MTA has partnered with his office’s COP Program to equip the MTA police force with 670 kits of the heroin antidote naloxone, which can instantly reverse the effects of an opioid overdose. This will provide officers serving the Long Island Rail Road, Metro-North and the Staten Island Railway – in total, 14 counties in New York and Connecticut – with easy access to the life-saving drug in case of a medical emergency.

The Attorney General also made more COP-related news in Rochester, where he announced that the Rochester Police Department and the Brighton Police Department have signed on to participate in the program. He also highlighted that a total of twelve Western New York law enforcement agencies have applied to participate in COP, bringing the statewide total of involved agencies to 107. The 107 agencies have requested a total of 3,456 kits. To date, 59 applications have been approved, along with $186,285 in funding. Watch the full press conference here, or view photos from the event here.

Attorney General Schneiderman released a new report on the danger microbeads – tiny plastic beads that are included in many commercial cosmetic products – pose to New York’s waterways. The Attorney General was joined in Buffalo by local elected officials and environmental advocates to detail his findings and to call on the State Senate to pass his Microbead-Free Waters Act, which would make New York the first state in the nation to ban the sale of products containing this form of plastic pollution.

The report includes several startling findings, including the fact that nineteen tons of microbeads are washed down New York drains each year. It also discussed the impact of microbeads outside of the Finger Lakes region, such as in Albany and Nassau County.

In addition, Attorney General Schneiderman published an op-ed in the Albany Times Union on the unseen threat of microbeads as well as his legislation’s effort to provide a solution that will protect the health of our families and our environment.

As fast-food workers around the world rallied for fair wages as part of the Fast Food Global protest, Attorney General Schneiderman spoke out regarding this movement as well as New York’s fight against inequality in this industry. In his op-ed published on The Huffington Post and in El Diario La Prensa, he expressed his support for the workers’ push to organize, commenting on the destructive force of income inequality as well as the stark disparity in the fast-food industry. During his interview on MSNBC’s All In with Chris Hayes, the Attorney General elaborated on the connection between workers’ organization and increased reports of criminal activity by employers, which enable his office to seek justice for cheated workers. He also stated that, in the past few months, the Attorney General’s Office has secured restitution for more than 3,000 workers victimized by wage theft.

After the pastors of the Glad Tidings Tabernacle took out millions in illegal loans from the New York City church to purchase a home – only to fail to pay them back – Attorney General Schneiderman reached a $1.7 million settlement to return the money to the organization.

Under New York law, officers and directors of religious organizations, including ministers, are forbidden from taking any loans from the entity they serve – much less loans to finance personal expenses and lifestyle choices.

The Attorney General secured the arrest and arraignment of Ock Chul Ha, President of the not-for-profit Korean Social Service Center, for operating a pervasive, three-year scam in which he falsely promised clients – primarily elderly Korean-Americans – placement in low-income housing in the city’s coveted 421(a) program. Ha charged his clients based on his fraudulent claims, stealing approximately $780,000. If convicted, Ha faces up to 15 years in prison.

In response to the Yates County state of emergency declared by Governor Cuomo following severe flash flooding, Attorney General Schneiderman issued an open letter to locals vendors warning them that his office is on the lookout for price gouging, the inflation of the price of necessary goods and services. Anyone who comes across a dramatic increase in the costs of essential items should immediately report it to the Attorney General’s Office here.

Schneiderman Reflects On 60th Anniversary Of Historic Brown Vs. Board Of Education Ruling

Attorney General Schneiderman released a statement on the 60th anniversary of the United States Supreme Court’s decision in Brown vs. Board of Education, commemorating the landmark ruling while encouraging redoubled efforts to advance the civil rights of all New Yorkers – especially opportunities for success available to our children. In honor of the anniversary, the Attorney General’s Civil Rights Bureau visited NYC public school students at the Urban Assembly School for Law and Justice to discuss the importance of the Brown ruling and the continuing significance of diversity in classrooms.

James Muniz exploited the love and pride parents feel for their children to build his fraudulent child modeling agency on Long Island. Now, through his plea agreement with the Attorney General and the Nassau County District Attorney, he will serve up to five years in prison for his crimes and will return the $236,000 he scammed.

Please join the Attorney General and his senior staff for a Suffolk County Community Forum in Brentwood on Tuesday, May 20th at 6:30PM and a Mid-Hudson Valley Community Forum in Poughkeepsie on June 9th at 6:00PM. Complete details about these events are available in the fliers below. 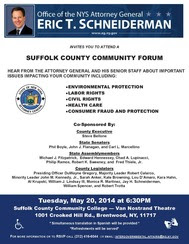 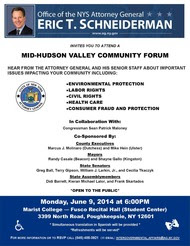 The Attorney General joined Congresswoman Grace Meng at a fraud prevention forum for Queens seniors, providing important tips on how to avoid getting scammed.

Attorney General Schneiderman applauded the passage of Minnesota legislation requiring the inclusion of kill switch technology on all smartphones, a move that his Secure Our Smartphones Initiative has pushed for the past year.

Also, in an editorial earlier this week, the Washington Post encouraged the smartphone industry to take the necessary steps to protect consumers from rising thefts.

The Attorney General praised the newly opened the National September 11th Memorial & Museum as a “permanent reminder of unity and strength that emerged from tragedy.”

For more info on AG Schneiderman and other elected officials don’t hesitate to hit us up at RandyKFisher@gmail.com.