In Yonkers, Attorney General Schneiderman unveiled his inVEST Partnership, a new statewide initiative that will allocate $3.5 million in civil and criminal forfeiture funds to help law-enforcement agencies buy bulletproof vests for sworn officers. inVEST will offer financial relief to agencies hurt by recent drastic spending cuts to the Federal Vest Program – grants for the purchase of bulletproof vests in New York alone have decreased by 81%.

The danger that law-enforcement officers face on a daily basis – and the ability of bulletproof vests to keep them safe – cannot be overstated. Since 1984, 71 New York police officers have been shot and killed on duty. In that time, 3,000 lives have been saved by bulletproof vests. At this week’s announcement, the Attorney General was joined by Sergeant Thomas Kelly of the Schenectady Police Department, who was saved from a gunshot wound by his bulletproof vest. In an op-ed published in the Journal News, Attorney General Schneiderman emphasized our “obligation to protect those who are sworn to protect us,” a point that was echoed in a Schenectady Daily Gazette editorial praising the initiative.

Joined by State Assembly Majority Leader Joseph Morelle and Senator Patrick Gallivan, Attorney General Schneiderman proposed the Payroll Card Act, legislation that would offer new regulations for the growing payroll card industry to increase protection for workers, clarify ambiguities in the law and to ensure that payroll cards offer a convenient and beneficial method for workers to access their pay. The Payroll Card Act would require clear disclosure of payroll card fees and restrict certain fees. It would also safeguard employees’ ability to select an alternative method of payment, a reform that would address new findings by the Attorney General’s Office that 40% of employers using payroll cards did not offer their employees the ability to opt out of the program.

Following a 10-month investigation called “Operation Yardwork,” Attorney General Schneiderman busted a drug ring that distributed heroin, cocaine and illegal prescription medications between New York City, the Capital Region and other upstate counties. 25 people have been charged with a combined 340 counts in connection to this major drug network. Wiretaps revealed that the traffickers used code words to disguise their illegal drug activity: referring to powder cocaine as “Christina Aguilera” and crack cocaine as “Britney.” This massive takedown and indictment are one aspect of the Attorney General’s ongoing “all levers approach” to combating rising drug abuse.

Attorney General Schneiderman praised the State legislature for passing his proposed legislation to increase New York’s maximum number of land banks from 10 to 20. Land banks are a critical tool to help communities plagued by vacant and abandoned properties in their ongoing recovery from the housing crisis. This new bill will expand on Attorney General Schneiderman’s Land Bank Community Revitalization Initiative, a $33 million program that has already funded 8 land banks statewide, with more funding to be announced later this year.

Attorney General Schneiderman reached a $220,000 settlement with Hobby Lobby Stores, after the company ran a two-year-long campaign in New York advertising a bogus “sale.” The company tricked customers to thinking they were receiving steep discounts by listing products as sale items for more than 52 consecutive weeks, though never-ending sales are in violation of the false advertising law. As part of the agreement, Hobby Lobby must change its advertising practices and will contribute $138,600 in gift cards for supplies to nearly 700 public schools within 10 miles of stores across Upstate New York.

Attorney General Schneiderman barred a Fishkill pastor from practicing law in New York without a New York license. The pastor will also repay $5,500 to a congregant that he charged for legal services, despite the fact that he did not have a New York law license and had been disbarred in Mississippi 15 years prior.

Please join Attorney General Schneiderman for a Nassau County Community forum on June 26 at the Nathan L.H. Bennett Pavilion in Hempstead. See the flyer below for complete details. 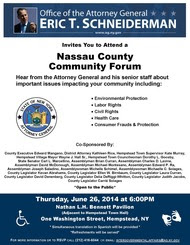 The Attorney General will also host a Mid-Hudson Valley Community forum in Poughkeepsie on Thursday, July 17 at 6pm at Marist College. See the flyer below for complete details. 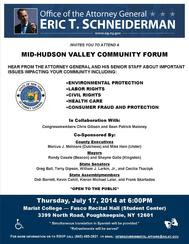 Attorney General Schneiderman helped kick off the Bronx Chamber of Commerce’s Small Business Expo, highlighting the Bronx’s resurgence as well as his office’s efforts to support the borough’s growth and development.

Attorney General Schneiderman proudly marched in the Puerto Rican Parade, the first since his office stepped in to guide the parade toward new, responsible governance.

For more info on Attorney General Schneiderman or other Political Figures hit us up at RandyKFisher@gmail.com.