As co-chair of President Obama’s Residential Mortgage-Backed Securities Working Group, Attorney General Schneiderman announced a $16.65 billion settlement with Bank of America, the largest in U.S. history with a single institution, to resolve charges of the bank’s misconduct, which contributed to the 2008 financial crisis. The settlement includes $800 million for New York State – $300 million in cash, and a minimum of $500 million worth of consumer relief. Of the $500 million in relief, $60 million will be used, for the first time, to provide principal reductions to underwater homeowners with FHA-loans, which account for 23 percent of distressed loans in New York. The relief also provides millions to support land banks and housing counseling agencies participating in the Attorney General’s Homeowner Protection Program. Including this settlement, Attorney General Schneiderman’s investigation into the banks has secured $60 billion in total, and $4 billion has gone to helping struggling New Yorkers. The Attorney General explained why this deal is a victory for millions of families in an Huffington Post op-ed.

Schneiderman’s Agreement With Macy’s To Prevent Discrimination Against Customers

The Attorney General reached an agreement with Macy’s to address more than a dozen recent complaints of profiling and false detentions at Macy’s flagship store in Manhattan’s Herald Square. The agreement will help ensure that all customers, regardless of their race or ethnicity, are treated equally at the retail giant’s 42 New York State stores. The settlement, which requires that Macy’s pay $650,000, is the second agreement reached this month by the Attorney General’s Civil Rights Bureau with a retail establishment — following last week’s settlement with Barney’s to implement similar anti-discrimination reforms — and comes on the heels of the 50th anniversary of the Civil Rights Act of 1964.

Following recent heroin overdose deaths at SUNY Oswego and SUNY Binghamton, Attorney General Schneiderman announced that 12 State University of New York (SUNY) campuses would be joining his Community Overdose Prevention (COP) Program. His COP funding will help equip 258 campus police officers with naloxone, the extremely effective heroin antidote that can instantly reverse the effects of an opioid or heroin overdose. The SUNY campuses that applied and will be receiving funding are: Purchase, Potsdam, Buffalo, Cortland, Oswego, Albany, Geneseo, Adirondack, Canton, Utica/Rome, Farmingdale, and New Paltz. The COP Program has now approved the distribution of nearly 28,000 kits to 164 police departments across the state, including the NYPD and MTA police.

Attorney General Schneiderman announced his fourth round of inVEST Partnership grants to help New York law enforcement agencies purchase bulletproof vests for sworn officers: Over $289,000 in funding will help 12 law enforcement agencies in Central New York, as well as the New York State Police, put 708 officers in this life-saving safety equipment. The Attorney General made his announcement at the Great New York State Fair in Syracuse, where he was joined by Syracuse Police Detective Richard Curran, who was saved by his bulletproof vest when he was shot twice while on duty in 2009. Through this round of funding, 215 of Detective Curran’s fellow officers at the Syracuse Police Department will receive vests. So far, the Attorney General has distributed more than $2.4 million to support the purchase of almost 7,000 bulletproof vests for agencies in Western New York, the Capital Region, the North Country, New York City, Long Island, Westchester, and the Hudson Valley.

Attorney General Schneiderman and Comptroller DiNapoli announced the arrest and indictment of three individuals, including a Capital Region-based developer, who allegedly participated in a scheme to circumvent campaign finance laws and illegally funnel contributions to the campaign account of form Halfmoon Town Supervisor Mindy Wormuth. Wormuth is also facing charges by the Attorney General and Comptroller in a separate campaign fraud case. This arrest is just the latest out of the Attorney General’s office: Since 2011, he’s prosecuted over 50 individuals in public corruption cases, including a sitting state senator, a current member of the New York City Council, and elected officials from both parties across New York State.

Attorney General Schneiderman sent cease and desist letters to 46 thrift shops across New York, ordering them to stop selling children’s clothing with drawstrings, which have been banned in New York since 2003. The letters follow an investigation by the Attorney General’s Office, which revealed that 90 percent of thrift shops statewide were still selling these dangerous items. From January 1985 through April 2011, the U.S. Consumer Product Safety Commission received reports of 26 deaths and 58 non-fatal incidents involving drawstrings on children’s clothing.

Attorney General Schneiderman secured the guilty plea of Hyun Ok Yoon Ung, the lead defendant charged in connection with a criminal ring which sold so-called “party packs,” involving cocaine and prostitutes, and laundered the illegal proceeds through front businesses. A joint undercover investigation by the Attorney General’s Organized Crime Task Force and the New York Police Department busted 18 individuals, including Hyun Ok Yoon Ung, in January, at a time when the gang was marketing its services to a high-end clientele coming to the New York metropolitan area for the Super Bowl. Hyun Ok Yoon Ung faces up to three years in prison and must forfeit $700,000 in proceeds from her criminal businesses.

With U.S. Attorney Loretta Lynch, Attorney General Schneiderman announced his $2.2 million settlement with New Rochelle nursing home Glen Island, resolving allegations that the facility and its owner submitted tens of thousands of inflated claims to the New York State Medicaid Program. The claims sought reimbursement for services provided, but at artificially high rates. Three of the nursing home’s employees were previously convicted for participating in this scheme, holding “tampering parties” to falsify medical records and conceal the institution’s fraud.

Schneiderman And DiNapoli Announce Arrest And Indictment Of Defendant Accused Of Theft Of Over $50,000 In New York State Pension Benefits

In another public integrity arrest this week, Attorney General Schneiderman and Comptroller DiNapoli also indicted a Florida woman who allegedly stole over $50,000 in New York pension benefits payable to her uncle – a retired employee of the Port Authority who died in 1988. The defendant allegedly submitted false information to make it appear as though her uncle was still alive and to continue cashing his benefits.

Attorney General Schneiderman and New York State Commissioner of Taxation and Finance Thomas H. Mattox indicted a large-scale, Brooklyn-based cigar distributor who allegedly skipped out on more than $6.1 million in state tobacco taxes. If convicted, the 45-year-old faces up to 25 years in prison.

The Attorney General reached a $27,000 settlement with Kingston auto dealer Prestige Toyota, which was adding an improper $650 “processing fee” to the purchase price of leased vehicles bought by customers at the end of their leases. No additional services were provided for payment of this fee, which was not properly disclosed. Under the settlement, defrauded customers are entitled to full refunds with 9% interest starting from the date of purchase. If more consumers come forward to the Attorney General’s office with proof they also were charged the illegal fee, they will be entitled to restitution. Consumers have until December 6 to contact the Attorney General’s office.

The Attorney General announced the guilty plea of a Rochester-based medication technician who stole approximately 650 prescription narcotics from her elderly patients, swapping them out for non-narcotic pills with a similar appearance to conceal her theft.

The Attorney General will discuss his office’s work on energy and environmental issues as the keynote speaker at a forum hosted by Pace University on Wednesday, September 3, 2014. See the flyer below for complete details. 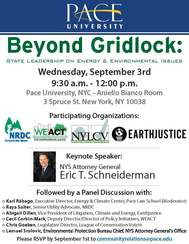 Following his inVEST announcement, the Attorney General toured the New York State Fair, stopping for chocolate milk and to check out a prize-winning giant squash. He also paid tribute to New York’s fallen officers at the Fair’s memorial.

Attorney General Schneiderman sat down with the Journal News’ Editorial Board to discuss his efforts to be tough and smart on crime.

In case you missed it, watch the Attorney General’s interviews with CNBC and Bloomberg TV on this week’s historic settlement with Bank of America.

In another case cracking down on abuses by caregivers, the Attorney General filed charges against a Rochester home health care aide who submitted phony time sheets and billed Medicaid for work she had not performed.

The Attorney General’s Office also secured a temporary restraining order against a Long Island pet shelter that was offering sick puppies up for adoption.

At the Yonkers Public Library, Attorney General Schneiderman honored the 215 Westchester County students who received his office’s Triple C award at the end of the 2013-14 school year. In total, the Attorney General’s Office has recognized 3,862 students statewide for their “courage, character and commitment” with this award.

For more information on AG Schneiderman and other politicians hit us up at RandyKFisher@gmail.com.