Four years ago LeBron James outgrew his hometown and took his talents to South Beach. Amid the unnatural departure process, as some pundits would describe it as, James also seemed to outgrow media-driven, off-the-court business endeavors as a championship legacy became 1A and 1B on his career list of priorities.

James’ homecoming has brought back more than just a HOF worthy set of skills to Ohio 41 times per year — it has also reinvigorated James’ creativity, and overall interest in getting in front of & behind television cameras to act & produce, respectively. Fans that once clamored over “The LeBron’s” Nike commercials and “More Than A Game” will soon get another taste of TV LeBron, this time repackaged in unique arrangements.

James plays a key role, as co-creator and producer, in “Survivor’s Remorse“, a STARZ original TV series set to debut this Saturday, October 4th. Survivor’s Remorse is dramatic comedy about an up-and-coming basketball player, Cam Calloway (played by Jessie Usher), navigating the waters of fame while facing the challenges his newfound celebrity presents, head on. At the premiere screening last week in Beverly Hills, James detailed how he faced similar situations as the shows protagonist, lending credibility to the plot twists viewers will come to enjoy.

Survivor’s Remorse also features the acting assistance of a set of familiar faces: Tichina Arnold (Martin and Everybody Loves Chris), RonReaco Lee (Sister, Sister and Glory) and comedian Mike Epps (Friday series, Soul Plane, Jumping the Broom). Another television project on the King’s crowded plate comes in the form of an animated series for the youth. LeBron and his Springhill Productions group has teamed up with ESPN Films and Disney to create a TV pilot, entitled “Becoming” showcasing numerous inspirational sports stories.

“Sports and athletes were my inspiration growing up”, LeBron said in a statement to detail the project. “It was the stories about Michael Jordan, Deion Sanders and Allen Iverson that kept me dreaming. When I learned that they had some of the same struggles and challenges I did, it made everything seem possible.”

A large portion of the inaugural pilot will be shot in Akron, Ohio, the area of LeBron’s upbringing. It will also showcase his AAU days and talk about his time at the renowned St. Vincent-St. Mary High School. The first episode will air October 26th at 8 p.m. on Disney-XD. LeBron and his business partner Maverick Carter will act as executive producers for the potential series. 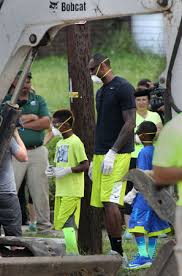 LeBron’s family will also have an opportunity at primetime exposure, come November. They will be featured on HGTV’s “Rehab Addict” TV show, which chronicles a week-long home makeover blitz in the West Akron area, according to the Akron Beacon Journal. “Local businesses and organizations provided materials and labor, and members of James’ family were among the volunteers […] The basketball star and his sons got their hands dirty on a few projects, too”, they said. The episode is set to air on HGTV November 20th at 9 p.m., barring any changes in programming.

So thats three 2014 screen opportunities for the King, not factoring in the ongoing Hollywood tug-of-war for rights to monetize James’ legendary high school career or the occasional Space Jam 2 rumor, of course. LeBron is flexing his guns, exerting his dominance — and we all know what that means for anyone standing his way.