In the wake of the A.M.E. Church massacre America’s leaders are asking that symbols of the Confederacy be removed from American culture

There is a debate on the congress floor, after the Dylann Roof shootings of nine A.M.E Church members last week, regarding the Confederate flag and its symbolism throughout the South and the entire U.S. Leaders are demanding that the flag and its imagery be removed from the American lifestyle as a whole and they are gaining support by some as well as ridicule by others.

In addition to Walmart, Amazon, eBay and Sears all announcing bans on the sale of Confederate flag merchandise, the flag has been removed from South Carolina’s State Capitol by order of Governor Nikki Haley; from the Alabama statehouse grounds at the order of Governor Robert Bentley; from the Mississippi state flag at the request of Senator Roger Wicker; from state issued license plates that bear the flag emblem in Georgia by order of Governor Nathan Deal and in Virginia by Governor Terry McAuliffe; Kentucky Representative Andy Barr called for the removal of the Jefferson Davis statue, the president of the Confederate States of America during the Civil War, from the state Capitol building.

We must put that flag in its place as a part of history. Bringing it down means the Charleston victims did not die in vain.”

#TakeDownTheFlag signs are being used as protest by a majority of southern White citizens who don’t agree with the Confederate flag and its ideologies. The hash-tag is also being blasted throughout social media outlets as an awareness campaign to take the racist Confederate flag down once and for all. 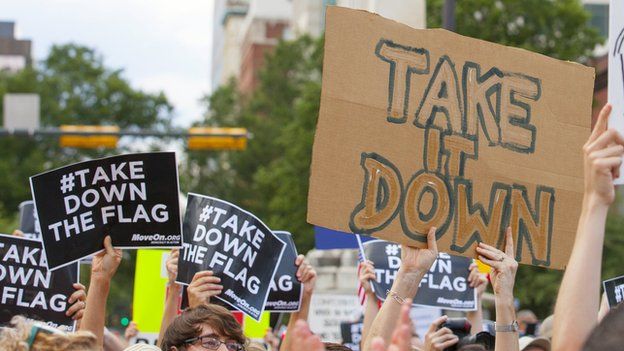