Laying Out A Vision For The New Tech Economy

This week, the Attorney General spoke at a forum sponsored by NY Tech Meetup on the intersection between tech and government. In his remarks, the Attorney General outlined his vision of “responsible disruption,” a new regulatory framework that will nurture innovation and encourage new business models, while also identifying hidden costs to protect consumers and workers. After the Attorney General made remarks, a panel of experts from his office discussed the current state of technology, internet and anti-trust regulation, and took questions from an audience of more than 100.  The Attorney General’s remarks, as prepared for delivery, can be found here.

The Attorney General is returning $400,000 to 14 Long Island homeowners who were victims of a mortgage rescue scam. Empire Property Solutions posted ads in local papers offering services to help families refinance their mortgages by turning over the titles to their homes through a “sale-leaseback” agreement, but failed to make good on their promises to use the payments to pay down their mortgages. In the end, the homeowners faced foreclosure and eviction. In response to an uptick in reported mortgage rescue scams, the Attorney General launched AGScamHelp.com, a web-based app that helps families report scams and connect with qualified housing counseling and legal services across the state. In less than a year, more than 26,000 New Yorkers have visited the website.

The Attorney General announced the appointment of Columbia Law Professor Tim Wu as Senior Enforcement Counsel and Special Advisor to the Attorney General. Wu, who coined the phrase “network neutrality,” has an unparalleled depth of understanding of the intersection between technology and the law. Wu will advise Attorney General Schneiderman on technology, competition, internet policy and legal issues. Wu also previously worked at the Federal Trade Commission during the first term of the Obama administration.

Attorney General Schneiderman joined U.S. Northern District Attorney Richard Hartunian and State Comptroller Thomas DiNapoli in announcing the conviction of former Assemblyman William Scarborough on fraud and theft convictions. Scarborough was sentenced to 13 months in prison on charges he submitted more than $54,000 in fraudulent travel vouchers during his time as a member of the New York State Assembly. Scarborough falsely claimed he had been at the state capitol for legislative business when, in fact, he was not in Albany, and he inflated the amount of time he reported he spent in Albany in order to receive a larger per diem. Scarborough’s sentence crystallizes the need for comprehensive reform to clean up corruption in our state, an effort that the Attorney General has been leading.

Cracking Down On Tax Fraud

Attorney General Schneiderman joined Commissioner of Taxation and Finance Jerry Boone in announcing the guilty plea of an Ithaca businessman for failing to pay sales and personal income tax to the state. Between 2005 and 2012, Jonathan Pargh underreported the taxable sales for his two companies and his business income by more than $1.6 million, defrauding the state of more than $280,000. This conviction makes it clear that when unscrupulous business owners break the law, they will be held accountable to the fullest extent of the law.

*Please do not send a reply directly to this e-mail. If you have any questions, comments or concerns please contact the Attorney General’s Office by following this link here.

The Attorney General will host a Community Prescription Drug Take-Back in Suffolk County on Saturday, September 26. Please refer to the flier below for complete details. 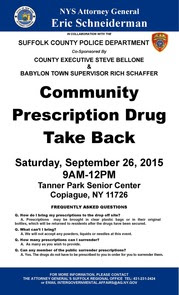 You could request a presentation from the Attorney General’s Office by submitting an online request? Check out our online Presentation Request Form.

Your family, friends, and colleagues could sign up for this newsletter here?

You could file a complaint using our online forms?

Have a question, comment, or complaint? Click here. You can also learn more about the various initiatives of the Attorney General’s office by visiting our website at ag.ny.gov.

For more information on AG Schneiderman or other politicians hit us up at RandyKFisher@gmail.com.