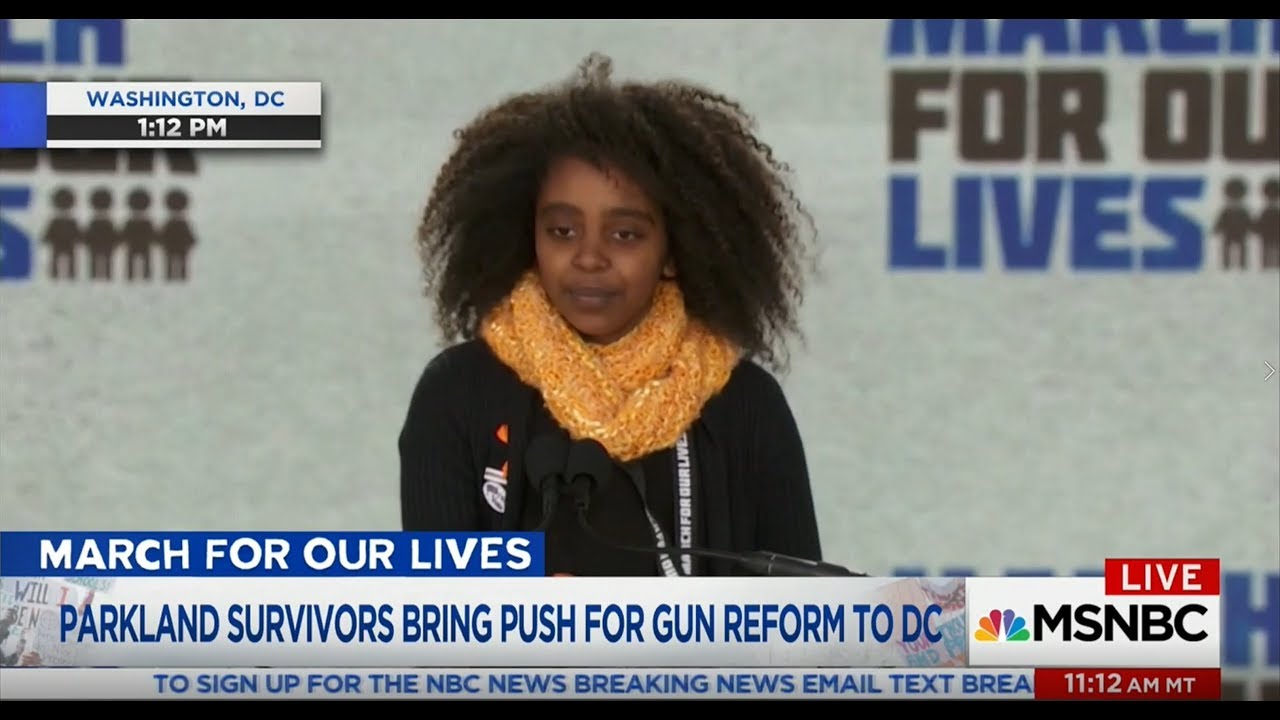 Naomi Wadler, in a voice beyond her years, addressed the fact that Black girls are more than statistic.  They are real people with hopes and dreams.

Around the world, anti-gun rallies were held on the sensitive topic of guns in school.

This weekend these rallies found an unlikely powerful voice in a young Black girl named Naomi Wadler. In a speech that people are calling her “I Have A Dream” moment, Walder spoke up for the voiceless in this nation. Speaking with a clear powerful tone that demanded the respect of her peers and adults alike her, “We know” repetitions cut through the crowd like a sword. With the unwavering confidence a grown woman that has found her purpose, she dedicated her speech for all the little Black girls who never make national headlines or covers of newspapers.

According to the Centers for Disease Control and Prevention (CDC) report in 2017, a Black child is 10 times more likely to be the victim of gun violence than a white child. But what does that mean? Based on article by Time Magazine who spoke to researchers at the CDC:

“Black children faced the highest rates of gun-related homicides, at 3.5 for every 100,000, researchers found. That’s nearly 10 times the rate for white children, at .4 for 100,000. In many cases, researchers noted, gun-related deaths occur “in multi-victim events and involved intimate partner or family conflict.”

We live in a nation where underage black youths are not only involved in firearm incidents in their neighborhoods or through gang violence but also from police involvement. We need only to look at the shooting death of Tamir Rice on November 23, 2014 in Cleveland, Ohio. While playing with a toy gun outside his building, he was gunned down by police officers Timothy Loehmann and Frank Garmback who never gave him warning or took the time to address the situation. Even though the the original call in that described someone pointing a pistol at someone clearly said that, “he is probably a juvenile” and “it’s probably fake” that information never made it to those officers.

When an eleven year old has crisp clarity beyond her years to call out a systemic problem plaguing our nation, politicians need to stand up and listen. Walder’s words were a clear calm to arms to make arms harder to get, yet NRA funded politicians refuse to adhere. We already know that President Donald Trump reneged on raising the gun purchasing age t0 21. When other nations are standing in solidarity with our youth, what are we doing? The NRA fell uncharacteristically silent on Twitter this weekend.  This was total contrast to its very vocal reaction to the nationwide school walkouts against gun violence March 14, when the NRA account tweeted a photo of an assault rifle and the message “I’ll control my own guns, thank you.”

“I have a dream that enough is enough,…” That this should be a gun-free world. Period.”

This weekend the lead the fight for anti-gun legislation, hopefully politicians listen. Below is a full transcript of Naomi Wadler’s speech:

Me and my friend Carter led a walkout at our elementary school on [March 14]. We walked out for 18 minutes, adding a minute to honor Courtlin Arrington, an African-American girl who was the victim of gun violence in her school in Alabama, after the Parkland shooting.

I represent the African-American women who are victims of gun violence. Who are simply statistics instead of vibrant, beautiful girls and full of potential.

It is my privilege to be here today. I am indeed full of privilege. My voice has been heard. I am here to acknowledge their stories, to say they matter, to say their names. Because I can, and I was asked to be.

So I am here today to honor the words of Toni Morrison: “If there is a book that you want to read but it hasn’t been written yet, you must be the one to write it.”

I urge everyone here and everyone who hears my voice to join me in telling the stories that aren’t told. To honor the girls, the women of color, who are murdered at disproportionate rates in this nation. I urge each of you to help me write the narrative for this world and understand, so that these girls and women are never forgotten.