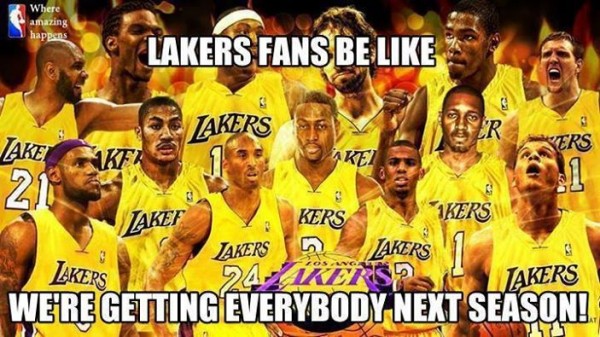 As everyone ponders who will be the new king of The West, Instagram users have fun at Lebron James expense.

To the heartache of Cavs fans everywhere, the dreaded day has come. Lebron has joined hands with the awesome legacy of Magic Johnson, Shaquille O’Neal, Kobe Bryant, and Kareem Abdul-Jabbar. Let us all the praise ‘The Rings.” Instagram users changing LeBron to “LAbron” have created some of the most hilarious memes to document this game-changing moment. From music video mashups to bandwagon sign up forms, social media has been set ablaze by the humorous take on the move.

Whether you consider Lebron a genius for making the smart move to the west or a ring chaser like Kevin Durant was called, his move means some interesting changes in the NBA. Who will be the new leader of The East? Who will join C in his new home? How do other league players feel about LeBron’s new house in L.A. (literally)? Who’s gonna be the new matchup in the 2019 finals? How much is that signed Cavs jersey from the first time now worth? Also, will Cavs fans burn LeBron Jerseys…again?

ESPN.com has already confirmed that a King James landmark will be coming down for the second time. Lebron with his arms outstretched on a 10-story billboard (which shows him wearing his trademark No. 23 jersey) will be removed shortly.

Stephen A. Smith of ESPN said it was the smart move for James to go. He didn’t fit the playing style of Philly, so L.A. was the logical place to set up shop. Even Kobe Bryant fans may have been shocked to see their “King” celebrate the highly controversial move.

Smith even congratulated Magic Johnson for making the move official, when James sat down with the Laker’s coach Luke Walton to discuss next year. So before NBA.com shuts down from all the Purple-Yellow 23 jerseys purchases, let’s see what the fans have to say about L.A.’s new royal bloodline.

Have y’all started filling these out yet……. #bandwagon #imalakerfan #golakers #lebron

Please call each and everyone out

‪Laker fans to Lavar for the next 4 years #lakers #lebron ‬