Halle Berry is never one to shy away from Internet trolls, whether she’s laughing along with one who’s cracking on her hands or coming at someone on a more serious note who tries to question her motherhood. The most recent occurrence was on a negative note unfortunately, and it had to do with her career as an actress and those of her female counterparts in Hollywood.

It started with the 71st Primetime Emmy Awards that aired this past weekend, where seasoned actress Michelle Williams won the “Lead Actress in a Limited Series/Movie” award for her role in the FX miniseries Fosse/Verdon.

Berry was quick to show support to her colleague on the big win, posting a picture of Williams on IG (seen above) as she accepts the award. The photo is layered with a prominent quote from her speech that reads, “So the next time a woman, and especially a woman of color, because she stands to make 52 cents on the dollar compared to her white male counterpart, tells you what she needs in order to do her job, listen to her, believe her.” Berry added the caption “Exactly” to her post, and that’s where things took a turn. 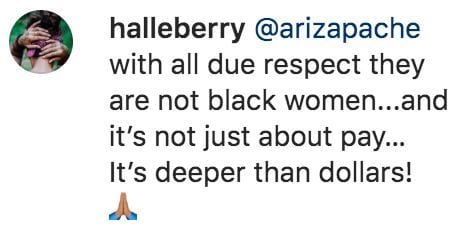 One person felt the need to comment by saying, “Victimhood mentality or pandering…..u don’t see Denzel or Morgan yapping away,” alluding to Berry and Williams’ equally-successful male counterparts Denzel Washington and Morgan Freeman, respectively. Halle clapped back with the quickness by replying, “With all due respect they are not black woman…and it’s not just about pay… It’s deeper than dollars!” A single prayer emoji followed, which makes it clear that the John Wick 3 star may have been coming more from a place of respect than roasting.

Many fans responded with comments of support for Halle, and we can probably all agree that the dynamics in Hollywood, or any workplace for that matter, should practice equality from all aspects.

Let us know your thoughts on this topic: do you see a problem with male/female inequality in your workplace? Sound off over on our Facebook and Twitter!