If you ask H.E.R. about her deepest loves in life, among the list of responses you will receive is her home, the Bay Area, and of course, music. Both topics radiate as she speaks with The SOURCE after hosting Bay Area music students for a session at the Oaktown Jazz Workshop.

The intimate engagement event was a partnership with the adidas Asterisk Collective and Foot Locker, which brought the students new musical equipment and more. The aim of the initiative is to create a positive change and help develop leaders in her community, while also fostering the musical talents of the students. The Asterisk Collective also partnered with H.E.R. to launch a new line of adidas, fitted with the logo and essential for performance and style.

The efforts of H.E.R. a businesswoman are not limited to the recording booth or the initiative with Asterisk, but also her recent Lights On Festival, where 10 deserving students joined the singer to watch today’s R&B stars. The Lights On Festival is the first music festival owned by a Black woman, and H.E.R. knows all about the work of making sure it becomes a staple, calling it a team effort.

In our conversation, H.E.R. talks about both the festival and the Oaktown Jazz Workshop event, impacting her home, success before a formal debut album and more. 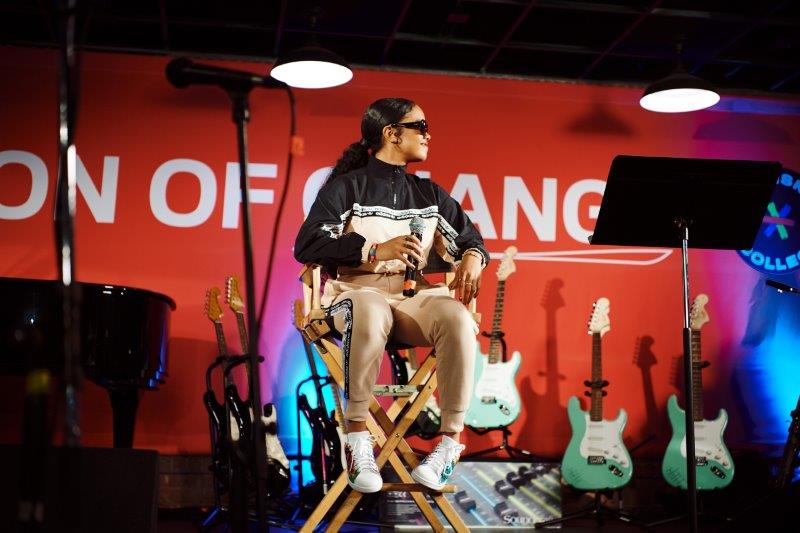 What made the Oaktown Jazz Workshop the right partner for this community project?
H.E.R.: I really liked the impact that Oaktown has made on the community, specifically the Bay Area, but it’s really just the beginning. I want to do this a lot more in the Bay Area specifically, and that was just the way to start it. My foundation, Bring the Noise, is really passionate about music programs and kind of just paving the way for these young musicians. So I figured why not start there?

Do you think there’s a specific experience that they’ll take away from today or a moment that you hope would be instilled in their future?
You know, I hope that they see me as a Bay Area native and think like, okay, I can do this, you know, especially cause I gave out the guitars and some other instruments. I just feel like to hear that you can do it from somebody that you look up to or admire or that you see as in a position you want to be. I think that that makes all the difference in the world. It made a difference to me when I was that age. They got to play for me and I gave them my feedback and like I thought it was really, really dope and special. Just giving that push, you know, and telling them even how often  I practice and what I do to prepare and that I was once in their shoes.

You mentioned they had the opportunity to play for you. When you give these experiences to community members and children, that things are often a two-way street and you get experiences back on your own. What do you think resonated in your own spirit as you got to watch these children basically begin to live out their dreams?
Well, the main thing was just remembering that I was that little girl and being able to watch them perform and see the looks on their faces. When I walked into the room, it was just like, wow, really? Like I like was it really that like it was really that special to them.

So you’re able to provide this opportunity today in collaboration with the Asterisk Collective by adidas and Foot Locker. How valuable was it for you to have these partnering entities believe in your initiative and how was the collaborative process for actually getting this done?
Yeah, I mean, so much goes into it, but the main thing is that everybody has the same goal. When you have people that share the same goal, you can make an even bigger impact. There are so many moving parts. It’s not just the face, you know, it’s not just me being the artist and being able to pick up a guitar. There is so much stuff that they do behind the scenes, just to help to be able to do this, to provide all these instruments. So adidas and Foot Locker were perfect timing, especially with my festival. The fact that they are just as passionate as me about this was perfect. 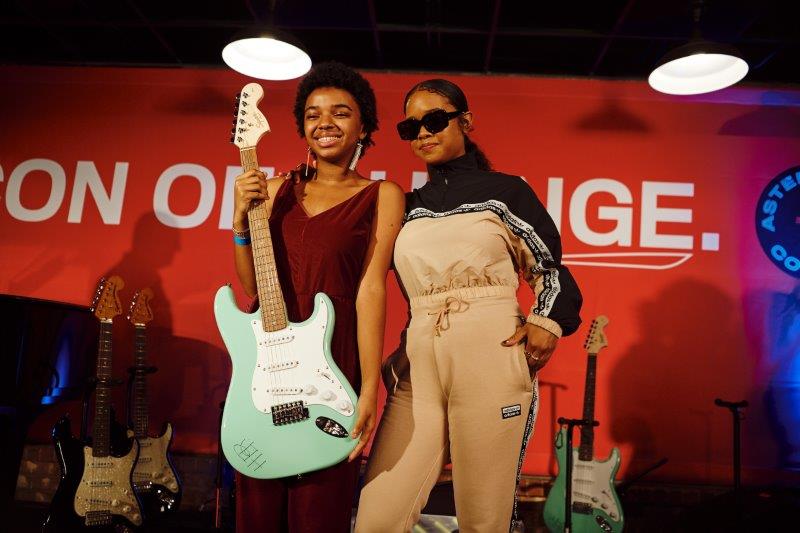 These students will be able to see you at the festival. What does it mean for you to be able to bring this group of talented artists all in one night to one event like that in your hometown?
Well, it’s crazy. I feel like I’m throwing the coolest party of the year. I’m bringing everybody to my home. My whole family’s going to be there.  The Concord Pavilion is actually a really special venue to me,  specifically because I went to a Chris Brown show and I watched him perform and I was just an audience member. Then last year I went on tour with him and I opened up for him at the same venue. So now at the same venue, I’m headlining and I’m doing my own festival. I’m just so proud of it. I’m so thankful for the team that I have because it was not easy to do this. 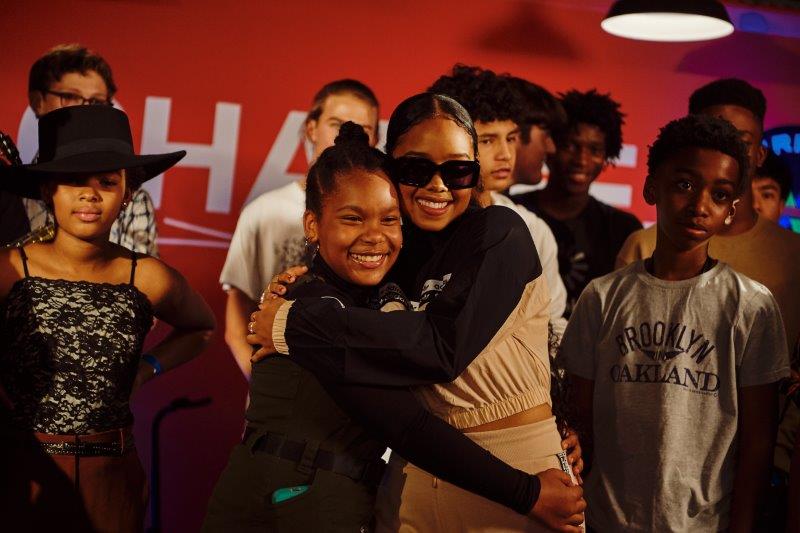 That’s what I wanted to kind of ask you about as well, because, for an event like this, you’re wearing a few hats. You have the hat of an artist, a festival lead. Then you are a peer and a fan because I’m sure you’re going to enjoy it as well. How complicated has it been managing all of that and what have you told yourself through this process?
I mean, the number one thing was everything’s going to fall into place. Everything’s going to work out and be fun.  We were just thinking about the creative, all the moving parts have to be managed. This is a festival I own. So I’m literally making sure everything is good. I’m just so thankful that I have this incredible team that’s working so hard. The key was that we’re all passionate. We’re all passionate about this festival. We want this to be a major R&B festival and it’s going to help so many artists to come.

Recently you received a Young, Gifted, and Black award at Black Girls Rock, and your speech was so powerful and it gave the true essence of what it meant to be a powerful and strong Black woman  that exudes talent, but also, it also provided a message that Black women following you can do the same. And, for people who aren’t Black women to understand the power that is in Black women. For you being surrounded by so many iconic women, who are either just starting out or who have had lengthy careers, what was that feeling like for you?
Well, first, thank you.  Since the beginning, I’ve had that foundation and that support. That’s what I am thankful for and that’s why I feel so blessed to have been on the path that I was and it is really important to me for women to support other women. That’s the message I really wanted to relay because that’s the message that was taught to me. That was my reality. You know, sometimes when you step outside of your world, you start to see the good and the bad. So I just want to spread the good that I learned from my situation. And that was the camaraderie amongst powerful women, women who are bosses, women who don’t take no for an answer and they’re not afraid to be themselves.

You have created this massive fan base. You have won Grammy’s. You’re touching and destroying every stage as you step on and all of this before releasing what many would call a proper debut out, do you feel those achievements are providing pressure on first forthcoming work?
Sometimes, but honestly, I have to like not to think about that. Like I have to literally tell myself it ain’t no pressure because that’s when you start overthinking. I’m just trying to remember why I do this and what got me here in the first place, you know? And it wasn’t any pressure. It wasn’t worried what everybody else was doing or what everybody’s going to think. It was just me being me. And that’s kind of the mentality that I’m trying to have with this outcome. And there’s something on it for everybody. That was kind of the key, to show every aspect of me. But yeah, it comes, you know, it comes and goes.

As you evolve and as an artist have you found yourself drawn to different creative processes or want to experiment with the way that you do things?
Yeah, absolutely. I love collaborating. I love, I mean, I kind of was already all over the place as a creative person in general, but I’ve definitely discovered new ways of creating and producing. Like, you just don’t know what’s going to happen when I walk in the room. Sometimes it’s me just to my phone, singing a bunch of melodies. Sometimes it’s me writing down my thoughts and feelings and then that just turning into a song. So it really depends.

We spoke on the response that you get when you touch stages, whether it be a concert, award show, a festival, you always have a rave review that follows. What helps you connect with any audience that you stand in front of?
That’s funny that you said that. Like I never believe it when it’s told to me. Honestly, I just love being on stage and I think they feel that.  Sometimes it feels like there’s nobody watching me. Sometimes I can be very selfish on stage. Like I’m doing this for me.  I’m having a good time, you know? I guess that’s why, because it doesn’t matter who’s in front of me. I never fold. I never crack under pressure or anything because I’m doing it for me.

Photos from the Oaktown event, H.E.R.’s set at Lights On Festival and the Asterisk collection are available below.