On Tuesday, Nikole Hannah-Jones, Black investigative reporter for the New York Times and 2020 Pulitzer Prize winning journalist for her groundbreaking work on the 1619 Project, announced on CBS This Morning with Gayle King that she has decided to decline an offer of tenure from the University of North Carolina at Chapel Hill amidst controversy. She will join the faculty of Howard University as Knight Chair in Race and Journalism to help educate the next generation of Black students. Knight Chairs in Journalism are top professionals who bridge the newsroom-classroom divide with innovative teaching, major outreach projects and their own journalism.  Award winning journalist Ta-Nehisi Coates author, former national correspondent for The Atlantic and Howard University Alum will also join the faculty as the Sterling Brown Chair in the English Department.  Both are recipients of the MacArthur Genius Fellowship award. He will begin the position following completion of several current obligations. “I heard a wise man once say, ‘A man who hates home will never be happy.’ And it is in the pursuit of wisdom and happiness that I return to join the esteemed faculty of Howard University.  This is the faculty that molded me. This is the faculty that strengthened me.” Coates said In a statement.

For Nikole Hannah-Jones the controversy came when last year she was halted and denied consideration for tenure twice by UNC after a board member who vets the appointments raised questions about her nonacademic background. Hanna-Jones was instead offered a five year contract with no explanation. Highly unusual considering the relvant academic leaders all backed her tenure and the previous Knight Chairs (who were White)  who held the position automatically received tenure. Her tenure application continued to stall due to political interference by conservatives and objections by a top donor at the journalism school. In a statement, Hanna-Jones says “it’s due to the political firestorm that has dogged me since the 1619 Project published.”  The UNC trustee board, after threat of legal action, weeks of protests from Black students and faculty, numerous professors and alumni voiced frustration and a national scandal, finally took up her submission and in a vote of 9-4 decided to offer her tenure. UNC journalism school Dean Susan King, who supported Hannah-Jones throughout her application, said in a statement, she hopes “that UNC can learn from this long tenure drama about how we must change as a community of scholars in order to grow.” 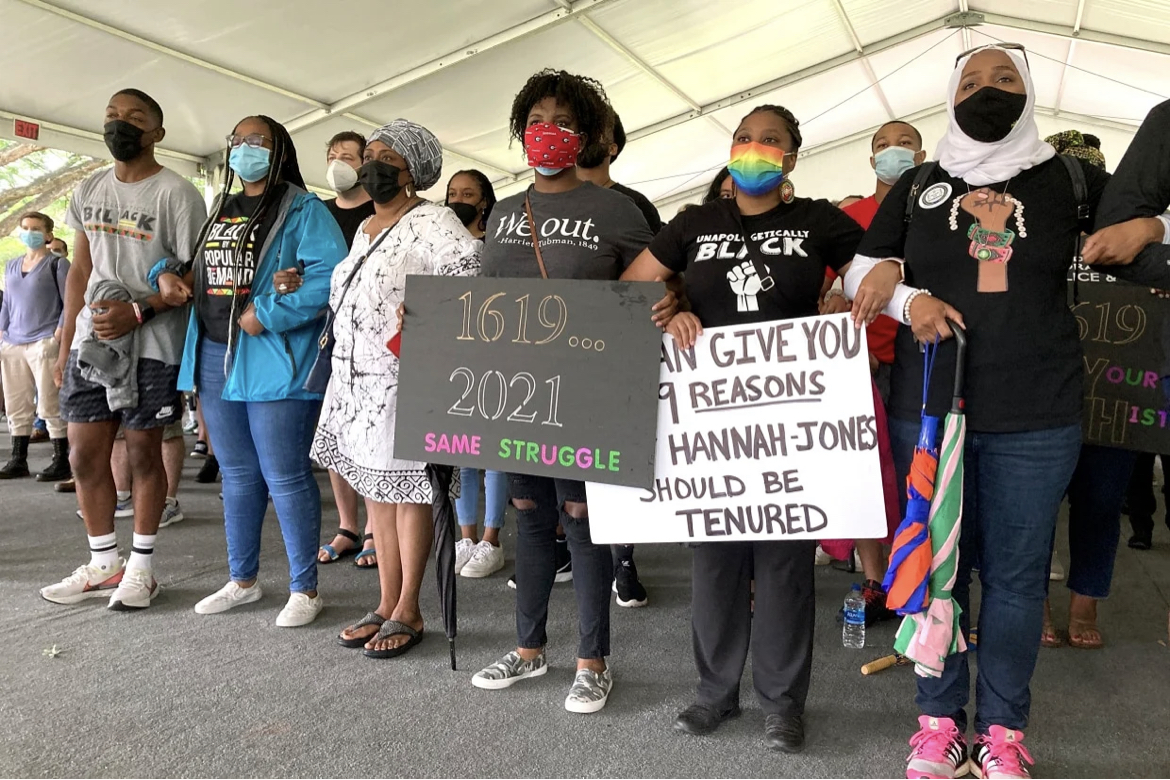 In the CBS This Morning interview, Gale KIng asked, why a Historically Black University now?  “Since the 2nd grade when I was being bussed into white schools . I’ve spent my entire life proving that I belong in elite white spaces that were not built for black people and I’ve got a lot of clarity through what happened at the University of North Carolina and decided I did not want to do that any more.”  Hannah-Jones’ and Coates’ Howard appointments are supported by nearly $20 million donated by three philanthropic foundations and an anonymous donor, gifts meant to bolster Howard’s investment in Black journalists, the university said

In her statement Hannah-Jones says “The Board of Trustees (at UNC) wanted to send a message to me and others like me, and it did. I always tell college students and journalists who are worried that they will face discrimination, who fear that they will be judged not by their work but for who they are or what they choose to write about, that they can only worry about that which is in their own control: their own excellence. I tell them all they can do is work as hard as possible to make themselves undeniable. And yet, we have all seen that you can do everything to make yourself undeniable, and those in power can change the rules and attempt to deny you anyway…“Since the second grade when I began being bused into white schools, I have been fighting against people who did not think a Black girl like me belonged, people who tried to control what I did, how I spoke, how I looked, the work I produced. I have never asked for special treatment. I did not seek it here. All I asked was to be judged by my credentials and treated fairly and equally.”  Read Nikole Hannah-Jones full statement HERE