With heroin addiction on the rise in New York and across our nation, Attorney General Schneiderman took a bold step to save lives, launching his Community Overdose Prevention (COP) program. Funded largely by money recovered from drug busts, the initiative would equip every state and local law-enforcement officer with naloxone, the extremely effective heroin antidote that can instantly reverse the effects of an opioid overdose. All agencies are encouraged to apply to the program here, and anyone can learn more here. Also, you can follow the hashtag #OAGCOP on Twitter for updates.

Schneiderman on Insider Trading 2.0: “We Need To Level The Playing Field And Find The Right Way To Be Fast”

Attorney General Schneiderman published an op-ed in the New York Daily News on his year-long investigation into Insider Trading 2.0 and the questionable practices used by a small group of elite, high-frequency traders to get ahead. Following the release of “Flash Boys,” a new book by Michael Lewis that has added to the important conversation on the unfair advantages of high-frequency trading, the Attorney General appeared on CBS This Morning, Bloomberg TV and CNBC’s Closing Bell to discuss his work to “level the playing field” and return credibility to Wall Street. His investigation also received praise from Senator John McCain and broker Charles Schwab.

Attorney General Schneiderman filed a $70 million lawsuit with the City of New York against FedEx, alleging that the company blatantly disregarded its long-standing agreement with New York – and violated federal and state law – by shipping nearly 80 million untaxed cigarettes to consumers statewide. The suit also claims FedEx engaged in a pattern of racketeering activity with various cigarette retailers to traffic their contraband.

The Attorney General took an important step to limit the marketing of a type of payday loan known as title loans, which target unsuspecting consumers with poor credit histories as a fast way of obtaining cash. Under new agreements with his office, 10 businesses located across the state, from Buffalo to Long Island, will stop obeying orders from these predatory companies and will no longer repossess vehicles on their command.

Attorney General Schneiderman secured a court judgment shutting down a Rochester-based car dealership that tricked consumers into purchasing used vehicles without titles clear of original loans – leaving customers at risk of having their cars repossessed by lenders. Any consumer with additional complaints about Frontier Autohaus should contact the Attorney General’s Rochester. Regional Office at (585) 546-3240.

The Attorney General’s Office reached an agreement with the Ontario County Sheriff’s Department to ensure that the county’s community of 2,200 (and climbing) Limited English Proficient residents will have improved access to local public safety and law enforcement services. The Ontario County Sheriff joins a growing list of agencies across the state that are working cooperatively with Attorney General Schneiderman to improve language access, including the Nassau County Police Department, the Rochester Police Department, and the Middletown Police Department.

In another step forward in the fight against the smartphone theft epidemic, Attorney General Schneiderman was joined by Congressman Higgins to announce the Congressman’s co-sponsorship of legislation in the U.S. House of Representatives that would require a kill switch on every device. The Attorney General also announced that Tonawanda Town Supervisor Caruana and Police Chief Palombo have joined the global Secure Our Smartphones (S.O.S.) Initiative.

Schneiderman On The Supreme Court Decision In McCutcheon vs. FEC

Attorney General Schneiderman expressed his disappointment in the Supreme Court’s decision in McCutcheon v. FEC, which struck down aggregate limits on political campaign contributions. The Attorney General remarked on the importance of campaign finance laws to the “integrity and fairness” of our democracy and stated that the fight for fair elections will continue.

As co-chairs of the Secure Our Smartphones (S.O.S. Initiative), Attorney General Schneiderman and San Francisco D.A. George Gascón released a statement praising Samsung, Verizon and U.S. Cellular’s decision to include anti-theft features on the new Galaxy S5 as “a step forward” and a clear response to the call for action against the violent smartphone theft epidemic. The Attorney General and District Attorney also called for stronger theft deterrents and encouraged other members of the industry to join this progress. 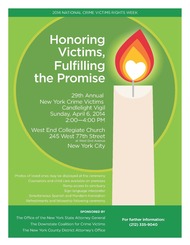 Attorney General Schneiderman welcomed the new chiefs of his Public Integrity, Internet and Taxpayer Protection Bureaus to the office.

The Attorney General commented on the tragic death of Officer David W. Smith, of the Village of Johnson City Police Department, who was killed in the line of duty.

Attorney General Schneiderman praised the new logo selected by the Puerto Rican Day Parade’s Board as “a symbol showing their commitment to making this the parade for the people.”

For more information on Attorney General Schneiderman and other politicians please hit us up at RandyKFisher@gmail.com.