As Barbados is welcomed into the foray of nations in the Western Hemisphere that have embraced female leadership, Rihanna expressed her joy via social media.

The Caribbean nation of Barbados is ushered into the 21st century with its first female prime minister, Mia Amor Mottley. As head of the Barbados Labour Party (who also won all 30 seats in the House of Assembly), the island nation prepares for new change under new leadership. Her party campaigned on a platform attacking high taxes and the expensive cost of living on the island that was pushed by the old regime.

On Rihanna’s best friend’s Leandra Simone Instagram account, she cosigned her excitement of the moment leaving the message: 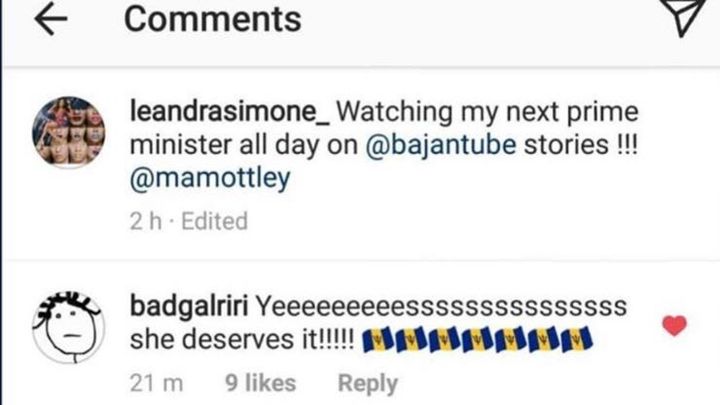 Mia Amor Mottley was sworn in as Barbados’ 8th prime minister after gaining its independence from Great Britain in 1966. The “Lemon” singer also posted this to her social media to congratulate Mottley on her historic win:

In a world that has been racked by the #Metoo movement, it is important to see women of color rise to power. On Bajan Tube they reposted the New Primemister’s first remarks to her people: