Are you ready for a modern-day Black Bonnie and Clyde? Lena Waithe, the Emmy-winning screenwriter, already has everyone on the edge of their seats for Queen & Slim as she explains to Complex.

The film is “Bonnie & Clyde meets Thelma & Louis meets Set It Off. Waithe worked closely with James Frey to develop the story, which she wrote. Universal Pictures will release Queen & Slim a romantic thriller film directed by Melina Matsoukas on November 27.

“Thank you for this journey…no matter how it ends.” Watch the new #QueenAndSlim trailer, and see it in theaters November 27. pic.twitter.com/nqmivxPdIO

“I wanted to explore a world where getting pulled over by the police is like playing Russian roulette, and your only weapon against injustice is your ability to never let go of who you are,” Waithe announced at the BET Awards earlier this summer.

It’s a young Black couple’s first date and after leaving dinner they decide to continue their night, but to their surprise blue and red flashing lights race behind them. A police officer pulls them over in the middle of the evening because they failed to use a turning signal. Things quickly escalate despite the minuscule infraction and the officer draws out his weapon onto the couple and aggressively threatens them. In self-defense, Slim hastily grabs the gun and fatally shoots the officer.

“It’s a story of resistance and a story in which we are never victims and most importantly, a story about the strength of Black love,” Melina Matsoukas explains.

The pair immediately goes on the run as they drive across the country, but they can’t fight their feelings for one another and they fall in love in the process. Their journey as fugitives isn’t an easy one as their faces go viral from a clip of the shooting. Queen, played by Jodie Turner-Smith in the starring role, and Slim, played by Black Panther’s Daniel Kaluuya embody the pure essence of Black love and throughout the film will use that power to fight against oppression. Turner-Smith and Kaluuya’s other castmates include Indya Moore from Pose, Chloë Sevigny, and Bokeem Woodbine. 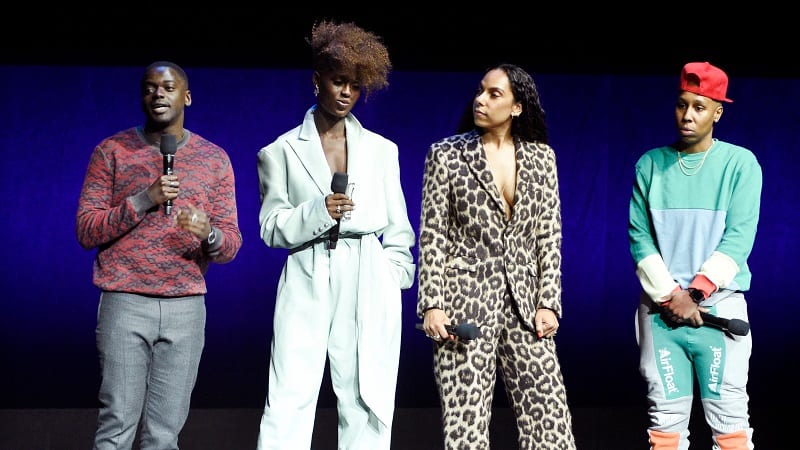 A film this anticipated must have a bomb soundtrack. The film’s scoring was created by Devonté Hynes, a young black R&B artist known as Blood Orange – we are in good hands. We know you heard “Staying Alive” the 1977 Bee Gee’s classic and “Runnin” the 1995 hit by The Pharcyde. Stay tuned for a closer look into the songs that carry us through this enticing journey. For more updates on the film, follow them on Instagram @queenandslim.